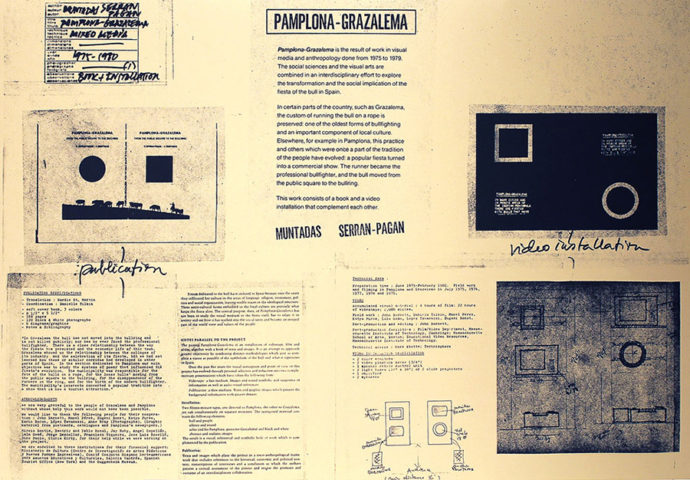 In the words of Niels van Tomme

What have we learned from Muntadas? After having had the honour to experience a body of work that has grown expansively throughout a more than four decades long career devoted to detecting and decoding the mechanisms of control and power through which hegemonic ways of perception are constructed, what is it that makes us return time and time again to the politically apt works of Muntadas?

There is an old-age idiom that goes “seeing is believing”, but if there is one thing to be absorbed from Muntadas’ insightful practice, it is the fact that seeing can never be straightforwardly aligned with believing. For Muntadas the media-saturated ways in which we experience the world are always already ideologically, politically and socially coded. In order to see properly we need a proper “translation”, a moment that allows the passive stance of seeing to transform into the more active act of knowing, which is the becoming aware of the very mechanisms of mediation itself. These are the tools Muntadas’ multidimensional media practice provides. “Warning: Perception Requires Involvement” goes the artist’s well-known 1999 slogan, thereby highlighting the multifaceted relationships between seeing, transcribing, perceiving and knowing, which are key to understanding his work. We cannot think the world without acting within, and becoming actively part of that world. And so Muntadas’ practice, besides offering a constructive way in which to perceive the media fabric around us, primarily makes us involved and active participants within the reality that surrounds us.

Muntadas’ early video works shift impressively from merely documentation of ‘actions’ towards a more complex investigation of the medium’s intrinsic political and ideological framings. Even though the work often looks scientifically detached, the emphasis lies not in following the protocols of documentary media production, but on forging new ways of seeing. It is a seeing that makes us aware of the intricate ways in which media filter and reshape the events we watch, or, conversely, how we are shaped by the manifold mediations that persistently take place right before our eyes. Once you see this, there is no way to unsee it.