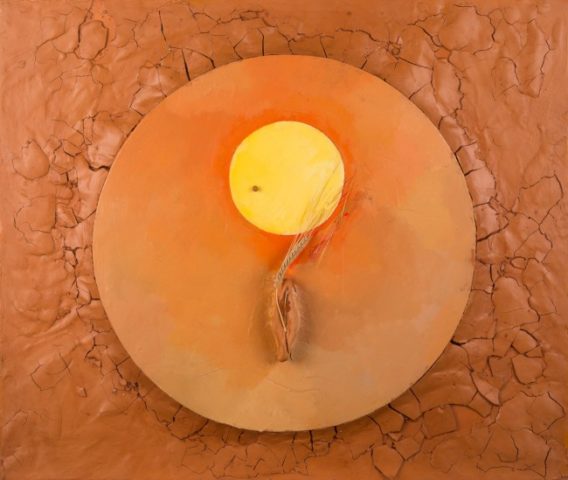 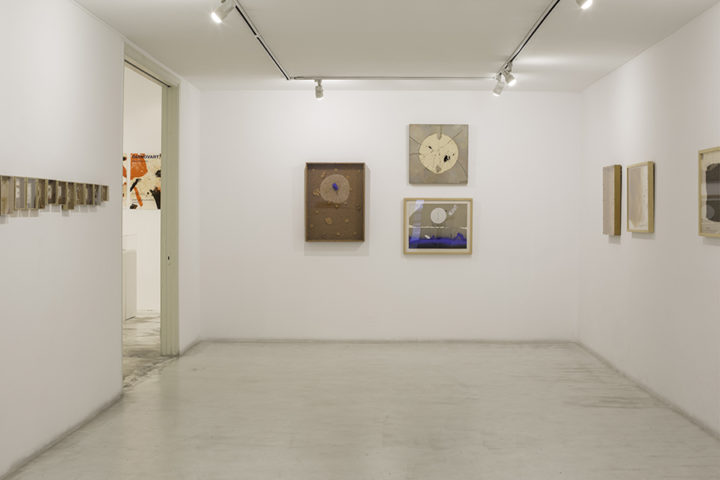 We present, within Any Guinovart, the exhibition Matèries en Erupció 1975-1985, with a selection of works of a relevant decade for Guinovart’s career, years in which he established an intense relationship with our gallery and also signified his international acknowledge with exhibitions at Martha Jackson Gallery in New York (1979), at Espace Cardin in Paris (1979), at Rizzoli Gallery in New York (1979) and at the Venice Biennale (1982).

As Alexandre Cirici mentions: “during the seventies, Guinovart had been dissolving operations of purification, of deliverance, of what Jung named “the descent to Hell” and had been finding the equilibrium of a complete maturity which touches in all the registers of his complete, splendid and critic vision of human society and the material environment that surrounds him, with the confidence of a great organist”.

The exhibition we set out is partly inspired in the spring of 1979, a date when three significant exhibitions were being placed in the city of Barcelona, at Galeria Joan Prats, at Galeria Trece and, above all, Matèria-suport-estructura at Fundació Joan Miró, three synchronized exhibitions which passed by three different ways but with the same shared destiny: the approximation to reality.

Of all Guinovart’s works of this moment stands out the labor with clay, introduced since a travel to Algeria, where he was shocked by the presence of soil, the desert and the adobe architecture. The main protagonist of this period is the material, the fibre cement too, the contrast between hardness and roughness of the support and the absolute spontaneity of graphics. Although Guinovart is an artist who transformed his works from “internal combustions”, he was also conditioned by the world that surrounded him: the nature of Castelldefels, where he has his atelier, the rural environment which marked his childhood, like Agramunt, and also the cities of Barcelona, Paris or New York.

“I constantly need the resource not of transgressing, but of getting out of the limits of what painting is. For example, collage, the elements that go from inside to outside and from outside to inside: many times someone has made the mistake of positioning me as an artist of collages, because there has been in me an intention of working from inside to outside rather than the opposite. It isn’t about gluing nor everything appeares from the base of the volcano. There is a feeling of the material being threw from inside, just in the opposite way of how we understand the collage. It isn’t the fact of painting-painting, it is a more existentially poetical aspect. What worries me is the background issues”

Josep Guinovart (Barcelona, 1927-2007). After an autodidactic education, he started his career as a painter in the forties in Barcelona. His paintings, marked by figuration, evolved to abstract collage linked to informalism by politicizing and expanding himself until breaking the limits of pictorial language, approaching to sculpture and installations. He received several prizes and awards, like the prize Ciutat de Barcelona d’Arts Plàstiques (1981), the National Award of Visual Arts of Spain (1982) and the National Award of Visual Arts of Generalitat de Catalunya (1990). Among his monographic exhibitions stands the one at Danubiana Meulensteen Art Museum, in Bratislava (2004), the one at La Pedrera in Barcelona (2002), Guinovart. Itinerari 1948-1988, at Tecla Sala in Hospitalet (1989) which traveled to Germany (Vila Merkel, Esslingen am Neckar; Museum Bochum, Bochum; Katalanischen Sommers in Hamburg), the exhibition at Fine Arts Museum of Long Island (1987), Matèria-suport-estructura, at Fundació Joan Miró in Barcelona (1978) and Contorn-entorn at Galeria Maeght in Barcelona (1976). In 2018, on the occasion of the tenth anniversary of his death, it have been celebrated Guinovart Year with exhibitions in various centers in Catalonia and abroad.