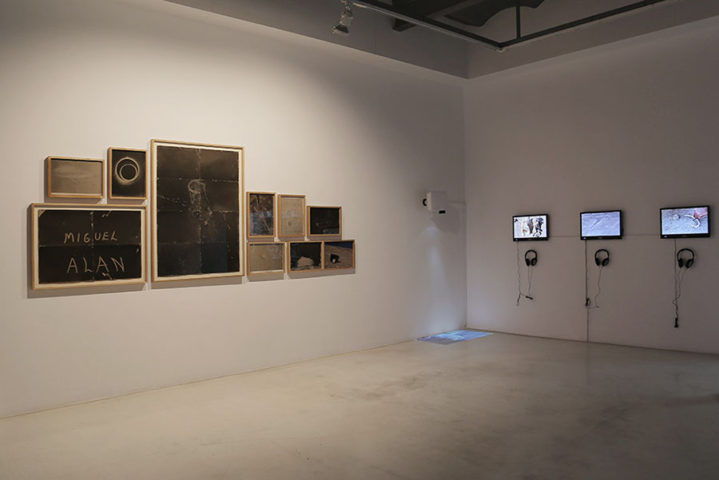 The four artists, from different conceptual approaches, sensibilities and aesthetic ideologies, perform works of complaint or criticism to human tragedies occurred in different parts of the world, with a language that forces the limit of the visual and textual, through various editorial, material and technologic devices. This extreme dimension of their researches becomes the metaphor of the title Habitar el vacío: art as a way to overcome isolation or lack of empathy among people.

Their works converge in the generation of an alert state of the viewer-reader versus territorial, economic, political and social issues affecting people in different places of the planet where hope becomes a revolutionary act. We are introducing the visual and textual research of the four artists who challenge the senselessness and the contemporary experience report.

Raúl Zurita (Santiago de Chile, 1950) lives and works in Santiago de Chile. His work is marked by the Military Dictatorship, during which he was detained and tortured. Poetry, performance and urban interventions are part of a repertoire of actions that he developed critically, creatively and interdisciplinarily. Raúl Zurita alternates his literary work, poetry recitals and teaching work at Diego Portales University and Harvard. He has won major awards such as the National Prize for Literature in Chile, Pablo Neruda Award, the Italian Pericle d’Oro Award, the Guggenheim and DAAD scholarships, among others.

Alfredo Jaar (Santiago de Chile, 1956) lives and works in New York since 1982. This artist, architect and filmmaker has exhibited in art centers of all around the world and has participated in biennials such as Venice Biennale (1986, 2007, 2009, and representing Chile, 2013), São Paulo Biennial (1987, 1989, 2010) and Kassel Documenta (1987 y 2002). Among his solo shows there are the ones in New Museum of New York, Whitechapel gallery of London, MACRO Museo d’Arte Contemporanea Roma, Moderna Museet of Stockholm, and Museum of Contemporary Art de Chicago. He is National Prize for Art in Chile.

Iván Navarro (Santiago de Chile, 1972) lives and works in New York since 1997. He has participated in international exhibitions such as Venice Biennale, representing Chile (2009), Prospect2 of New Orleans (2011), la Havana Biennial (2012) and The Disappeared/Los Desaparecidos, exhibition organized by North Dakota Museum of Art that travelled through North and South America from 2005 to 2009. His solo exhibitions include those in Matucana 100, Santiago de Chile (2015 and 2007), Museum of Contemporary Art, Aukland, New Zealand and Sydney, Australia (2015), and Frost Art Museum in Miami (2012).

The artists will be present during the opening.

A catalogue has been published for the exhibition.