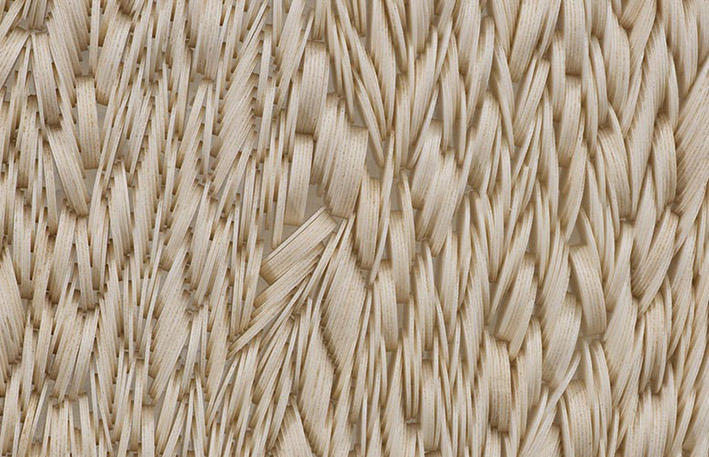 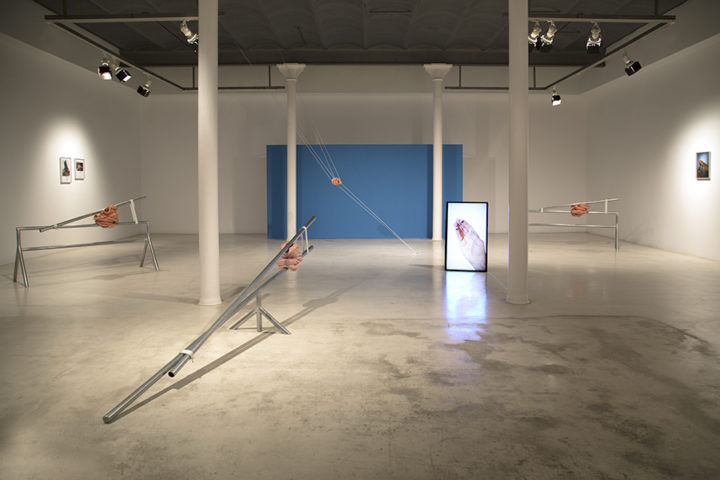 Through ceramic sculptures, videos and photographs, the artist outlines a discontinuous narration, starting from her own body and linked to space exploration. Precisely, the works of the exhibition revolve around the relationship of the artist’s body with her work materials, essentially the ceramics. Through the performative link and the double meaning between subject and material, between structure and mass, Teresa Solar reflects on concepts such as control, resistance, a definitely precarious balance of sense and accident.

The title of the exhibition, Ground Control, has a double meaning. On one hand it is a direct reference to the material, ground or clay, and the pressure exerted on it when working on the potter’s wheel. The body of the artist adopts a position of resistance to control the material, which is plastic and dynamic, this effort makes the body operate as a static structure, as an object, as matter. Through the title, this minimal experience of communication and conflicting balance between subject and matter increases in scale, linking with space travel: “Ground Control” is the center of operations from which the operation of the flight of a spacecraft is monitored. Serving the two for the purpose of a successful expedition, one cannot exist without the other and vice versa, they are part of the same mechanism, a single subject divided into two bodies.

The idea of tense balance between oneself and the world is present in the videos of the exhibition. In Being a person you did not know you were, we see a puppet that adopts the role of the divided adult, of an unknown entity who is born in us and who looks at us from the outside, who turns us in foreigners inside our body. Continuing with the idea of the divided subject, in the video Ground control, the artist is transformed into the clay ball that turns on the potter’s wheel. The image of the turning body is accompanied with fragmented stories that connect the accident of the space shuttle Columbia, exploding into pieces due to a failure in its protective shield, with the personal injuries suffered by the artist herself.

This double relationship is also present in the sculptures of the series Crushed by pressure. The pressure of the metal bars and cords repeats the process of creation of the ceramics, remembering the pile of rubble of an accident, in which the ceramic becomes the body of the subject, controlled and stabilized through structures that deform it. Ceramics allow us to emphasize the contrast between the primitivism of a material and a millenary technique, with the technological sophistication of the ceramic skins that cover the rockets.

In the pieces Pie de foto: Masa and Chamber, Breath, the artist in the potter’s Wheel sign language on White clay balls, creating words that are then compacted and deformed by their own weight, forming a language that exists in the phisical space. In Pie de foto: Masa, ceramic columns hold the photograph of a bone while the engraved stretch marks themselves mean “mass”; the missing body is completed trough the text that supports it.

Teresa Solar Abboud (Madrid, 1985) lives and works in Madrid. She has been a resident and visiting professor at Staatliche Akademie der Bildenden Künste, Stuttgart (2016), she was a finalist of the Rolex Mentorship Program (2016), she received the production grant Fundación Botín (2014), the production grant CAM (2011) and the prize Generaciones (2012). She has individually exhibited at La Panera Lleida (2016), Matadero Madrid (2014) & CA2M Móstoles (2012). Recently she has been selected as finalist for the Prize Cervezas Alhambra of Emergent Art during ARCOmadrid 2017. She will show soon at Haus der Kunst and at Kunstverein München.