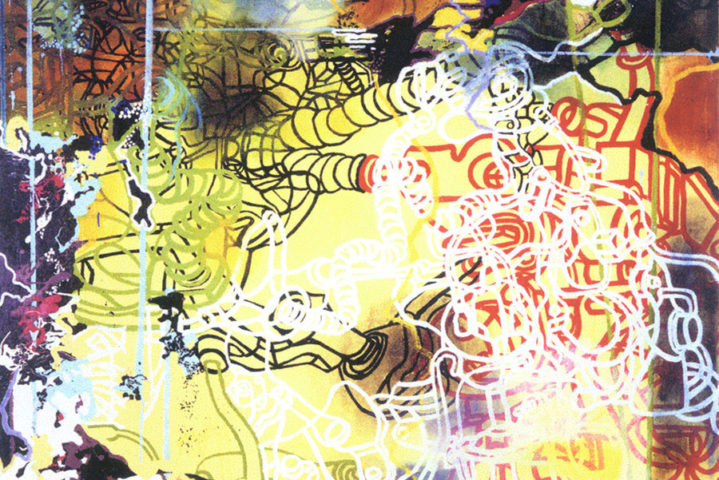 Galeria Joan Prats is pleased to present the first solo show in Spain of New York-based artist Lydia Dona. This exhibition, titled “The Engulfments of Change,” presents Dona’s newest paintings, as well as a selection of recent works on paper. Influenced by cinema, particularly film noir, these compositions embody a dramatic exploration, analysis, and synthesis of the urban labyrinth. In them, a clash ensues between the world and abstraction, which presents the viewer with the complexities of the changing models of technology and its relationship to the physical.

Diagrams derived from car repair manuals become metaphors of the increasing hybridization of the mechanical and the organic. Rendered in outlines, these “bodies” literally absorb into their skins the environment that surrounds them. The environment of glossy pools and contrasting light and shadow create glowing transparencies and dramatic flexibilities, bringing out the abstract-loaded models with energies of another nature. Like a modern alchemist, Dona transmits the landscape into the corporal, creating a new visual model. As critic Raphael Rubinstein writes in the exhibition catalogue, “One wonders how she is able to accommodate so many diverse elements, so many historical threads, so many different modes of abstraction into a single composition. What ultimately holds them together is the light that pervades and emanates from the paintings. It’s a distinctly artificial illumination, somewhere between a Flavinesque florescence and the radioactive glow given off by medical and scientific devices.”

Lydia Dona lives and works in New York City. Well known both nationally and internationally, Dona’s work has been featured in important museum exhibitions such as the 1991 Corcoran Biennial in Washington D.C., and From Albers to Paik, Works from the Daimler Chrysler Collection, Neue Nationalgalerie, Berlin, in 1999. Recent group shows include Officina America at the Galleria d’Arte Moderna, Bologna, Italy, in 2002, and About Painting at the Tang Museum, Saratoga Springs, New York, in 2004. Between 1995 and 1997, a survey show of her work from 1989 – 1995 traveled in the United States and Canada. Lydia Dona’s work is included in numerous significant collections, both public and private.