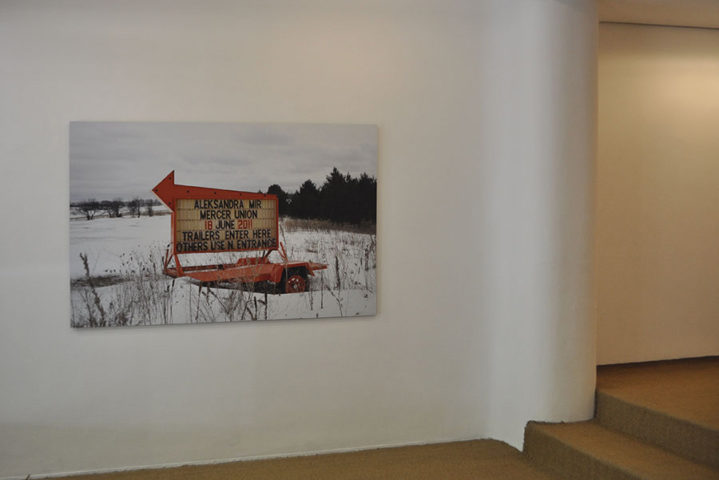 The exhibition links diverse attempts to chart the common territory while facing entropy.

The exhibit presents for the first time in the gallery a connection between the works of Aleksandra Mir, Knut Åsdam, Perejaume, Carla Zaccagnini and Alejandro Vidal.

The dynamics of the pieces lies around the new maps of old territories from which in an uneven but also complementary way, scenes realized from an apparent recreational posture, in turn reveal a plot of conflict are set out.

Carla Zaccagnini’s video spins around the non identity of the territory, that which is inhabited by its own absence.

In Knut Åsdam’s photographies, the impossibility of communication becomes evident through the tension zones and the sentences that prevent an outcome.

In the work of Aleksandra Mir, direction and position from the non place manifests its own process, the digital representational surface alters the form of perception in the work of Perejaume, and thus also in the occult, that which threatens us and the photosensitive images of Alejandro Vidal.

Knut Åsdam, Trondheim, Norway, 1968. He lives and works in Oslo. In 2011 he presented Abyss and Tripoli in Tate Modern London. He has exhibited in solo exhibitions at Kunsthalle Bergen in 2010, Manifesta 7 in 2008, 50 Biennale di Venezia in 2004, and 8 Istanbul Biennial in 2003. He has shown, among many others, at Sørlandets Art Museum of Kristiansand, Norway, Kunsthalle Bern, Switzerland, Moderna Museet in Stockholm, National Gallery of Art in Washington, New York MOMA/PS1, FRAC Bourgogne, Dijon.