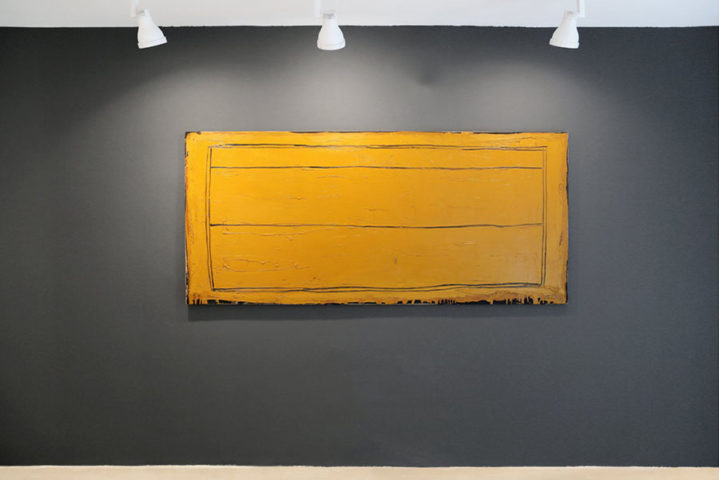 We present Hernández Pijuan 1977-2005, an exhibition dedicated to the 28-year-long close collaboration between Joan Hernández Pijuan and Galeria Joan Prats. The pieces selected correspond to the broad period of 1977-2005, but mostly focusing on the very last years of his career.

Although the set of pieces corresponds to a large period of the artist’s production, this exhibition does not have a retrospective character.

Galeria Joan Prats will present works on paper (gouache, watercolour, pencil drawing…) and oils on canvas of different sizes, as well as a selection of the archive of the artist – sketches & photographs, thus allowing the discovery of his creative environment and some of his projects or work processes.

This exhibition intends to be a tribute to the artist, an expression of gratitude and friendship but also a recognition and showing of a work that is still as contemporary as it was in its beginnings.

Joan Hernández Pijuan (1931-2005) has been one of the most internationally renowned Catalan artists. He has taken part in exhibitions at prestigious international art centres and has also received several awards, as for example the Premio Nacional de Arte Gráfico, in recognition for his trajectory (2005), the Premi Ciutat de Barcelona of Plastic Arts (2004) and the Premio Nacional de Artes Plásticas (1981).

Among his most outstanding exhibitions it could be pointed out his participation at the 51st Venice Biennale (2005); Tornant a un lloc conegut… Hernández Pijuan 1972-2002, at the MACBA, Barcelona (2003), travelling exhibition at the Musée d’art et d’histoire de Neuchâtel, the Konstshalle Malmö and the Galleria d’Arte Moderna de Bologna; Hernández Pijuan-drawings 1972-1999, at the Rupertinum Museum in Salzburg (2000) and Espacios de silencio 1972-1992 at the Museo Nacional Centro de Arte Reina Sofía, Madrid (1993), that was also exhibited at the Museo de Monterrey, México.

Recently his work has been shown at a retrospective exhibition at the Moscow Museum of Modern Art; at the exhibition Farben der erde, at the Altana Kulturstiftung in Bad Homburg, Germany and at the exhibition La distancia del dibujo, travelling to the Museo de Arte Abstracto Español, Cuenca, the Museu de Montserrat and the Museu d’Art Espanyol Contemporani, Palma de Mallorca.