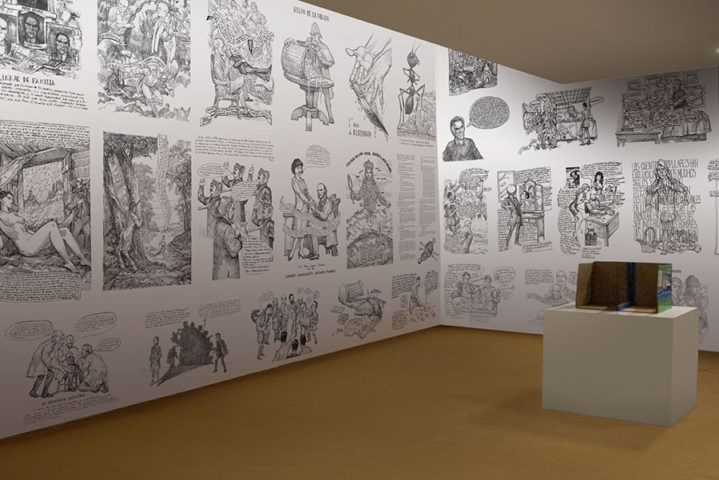 Modelling Standard is a project of long trajectory that starts from a mutual interest for historiography’s investigation methods common in micro-history, set out in Italy during the early seventies by a group of social scientists. The text: Huellas. Raíces de un paradigma indiciario written by Carlo Ginzburg published in 1978 has worked as a pillar to this investigation. In it Ginzburg breaks down 3 fundamental elements in the writing of history taking into account, in the most possible direct way, the versions of the subordinate classes:

– The search for clues, symptoms and fragmentary witnesses.

– The reduction of scale.

– The exhaustive analysis of sources.

The title is a reference to the concept of the Standard Model which is used in the field of physics to explain the almost invisible interactions which occur on a subatomic level in matter. With this analogy, far from pretending to establish relationships between fields of knowledge apparently dissimilar, our intention is to detect and understand those fragile connections which already exist and always have existed.

The result of this first stage of Modelling Standard consists in a network of caricatures and texts in which a series of famous characters become victims and killers of a great irresoluble crime. Among them, Sigmund Freud, Vilayanur Ramachandran, Carlo Ginzburg, Giovanni Morelli, Fantomas, Aby Warburg, Francis Galton, Arthur Conan Doyle, Raymond Roussel and Joe Orton.

For the presentation in the Galeria Joan Prats, we show for the first time the work on the whole, with the contribution of artists, illustrators and guest investigators, whose personal investigators work as new links of this chain which grows longer and longer… like devil’s dribble.