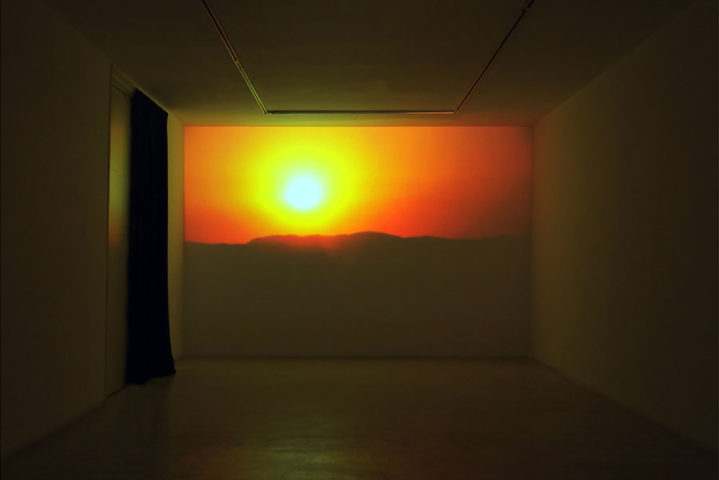 Galeria Joan Prats is pleased to present solid surface the first exhibition of Annika Kahrs in Barcelona, which brings together her most recent video works.

Annika Kahrs primarily works with film, performance and photography. She is interested in both social and scientific constructs, as well as evolved organic relations such as those between humans and animals. In her work Annika Kahrs examines representation and interpretation. Her films oscillate between obvious staging and documentary-like observation; a distinctive implication in Kahrs’ videos is that she never hides herself in the film, even if her presence is only unveiled in a short glance from an actor to the director, it reveals a singular approach to her environment almost guided by a mathematical process.

Annika Kahrs presents solid surface, with hills, valleys, craters and other topographic features, primarily made of ice – her latest video work about the dwarf planet Pluto. This film is set in a planetarium with a projected starry sky, where in the centre a round spot of light is located, invariably suggesting the moon. After watching carefully, the celestial body appears to be a spotlight that detects this nocturnal illusion and reveals the white projection screen. In this work, the artist resorted to imaginative as well as narrative devices to paint a portrait of Pluto, as our vision of it seems destined to change soon: a NASA mission will reach its orbit and, for the first time ever, close-up photographs will be taken of it. So far, even scientific illustrations of the planet have been based on speculation, and this imminent shift from imagined picture to actual depiction, according to Kahrs, is why Pluto became the ideal protagonist for her work.

The relationship between fiction and reality also plays a role in the video Sunset-Sunrise. In this film the viewer understands that he or she is observing a sunset: the star glowing red on the horizon. Gradually the picture lightens, a glistening veil moves across the picture from below, finally the projection is pure white. The riddle unravels itself as the camera moves backwards, disclosing that we are in a lecture theatre. We are not the witnesses of a strange natural spectacle, but rather just viewers of a projected sunset that is slowly dissolved in real sunlight, as the blinds in the room are raised.

In études cliniques ou artistiques, Annika Kahrs films a woman, who adopts body positions that seem to be gymnastic exercises or yoga postures. It is the artist herself who is giving the performer the precise instructions according to photographs from the Parisian psychiatric hospital, la Salpêtrière, showing the poses of the ‘major hysterical seizures’, a term coined by Charcot. In this film Annika Kahrs deconstructs not only the male gaze, but also, she unmasks photography as a staged medium in terms of documentation.

Annika Kahrs (Achim, Germany, 1984) lives and works in Hamburg. She has been awarded a number of prizes and scholarships including the George-Maciunas-Förderpreis in 2012, donated by René Block. In 2011 she won first prize at the 20th Bundeskunstwettbewerb of the German Federal Ministry of Education and Research. Kahrs has exhibited internationally, including Hamburger Bahnhof – Museum für Gegenwart, Berlin (2015), Kunsthalle Bremerhaven (2015), On the Road exhibition in Santiago de Compostela (2014), the Bienal Internacional de Curitiba, Brazil (2013), Hamburger Kunsthalle (2013), KW Institute for Contemporary Art, Berlin (2012), Kunst- und Ausstellungshalle der Bundesrepublik Deutschland, Bonn (2011), Goldsmiths University, London (2011), and the Velada de Santa Lucia festival in Maracaibo, Venezuela (2010). She will participate in the 5th Tessaloniki Biennale of Contemporary Art next June.