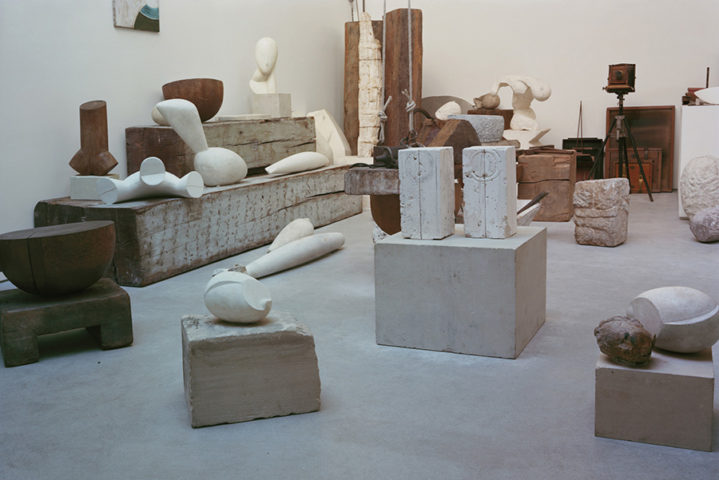 We are pleased to announce the exhibition of Hannah Collins, Begin Anywhere (John Cage), in which we present recent work, photographs and video.

The selection of photographs that constitute the exhibition reflects the artist’s interest in Modernism and its journey through the 20th Century, and it’s based on atelier Brancusi, which was given to Paris with the condition that the internal relationships remained the same as they had been in his lifetime. Brancusi’s journey to Paris, his own images of his work and his objects and unfinished works are all placed as if he had just momentarily left the space and yet the context is the space of an architect whose trajectory contains many buildings still now in production.

These images have been juxtaposed with a time-lapse film made in Northern France in an abandoned textile factory – the factory was also at the height of its production during the years of the 20th Century and not so far from Paris on the map. Against the slowly changing backdrop of a 24 hour time lapse film shot in the crumbling interior of the La Tossée factory over two nights and days the residents of Roubaix re-live their dreams. The dreamers all have a connection to Algeria and the dreams often travel to places unavailable in everyday life -whilst one man finds himself flying over his home in Algeria another dreamer becomes the President of France able to alter and change the country at will. The dreams of others are released from their private night-time place whilst the abandoned and neglected factory is made visible. As night slowly turns to day sound guides us through our reactions of slowly changing time where the only action is sound.