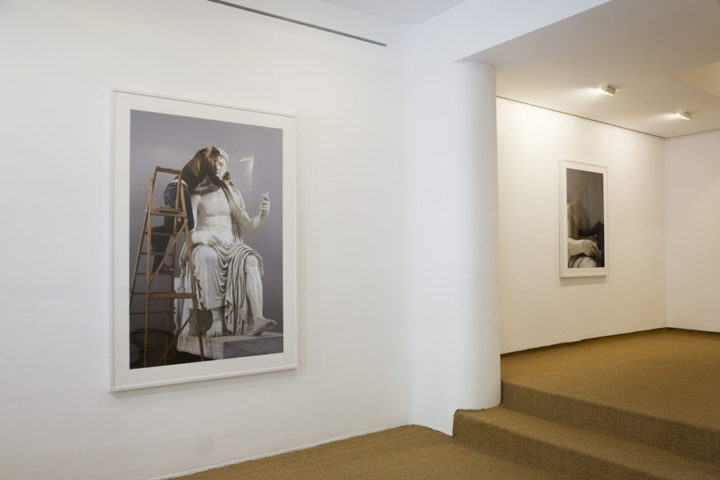 We present Eulàlia Valldosera’s exhibition Dependència mutual in which, through different supports, video, photography, documentary, light installation, the acts of cleaning and erasing are the central theme, renewing once again her declaration on the relationships of power through objects and our dependency to them.

In the performance that gives name to the video Dependència mútua and to a series of photographs;      Eulàlia Valldosera isn’t in the action but behind the camera. By request of the artist a Ukrainian origin cleaning lady is about to clean a statue of a roman emperor. The film was recorded in the Naples Archaeological museum, where the great marble statue of Emperor Claudius represents not only a treasure of the past, but also a weight for the Italian culture’s present. As she touches and cleans the male figure on a dominating pose, the woman challenges the dark and intangible dimensions of the symbols of power. Through this metaphoric action, the artist questions the relationship between the hegemonic and subordinate roles. She questions if the contraposition between the powerful and the subordinate – between male and female – is present in the deepest coats of our unconscious and considers the reciprocal dependency relationship according to which each role requires of the other to justify its own existence.

Liuba, a documentary in which the main character is a woman named Liuba, born in Chernobyl, ‘‘tells us who she is and how she has managed to place herself along many women in a precarious work entangle. Who carries the cleaning tasks in private and public spaces of each country? Where do they come from? ’’*

In the last room, a mirror, that rotates incessantly, ‘‘projects the images of one hand cleaning, following the movement of the cloth; and of a book, literally flying around the walls’’*. The exhibition space becomes a screen and, at the same time, a container; with this ironic gesture, the art gallery becomes the object of the exhibition. ‘‘The projected objects, on the other hand, sum up the dual tension present in the rest of the works in the exhibition, in the way of an epilogue’’*.

Eulàlia Valldosera was born in 1963 in Vilafranca del Penedès, and she lives and works in Barcelona. She has exhibited her works in important museums and art centres all over the world, including the Reina Sofía in Madrid 2009, the Musée d’Art Contemporain in Montreal, the PS1 MOMA in New York, the Antoni Tàpies Foundation, Barcelona in 2001 and the Center for Contemporany Art in Rotterdam 2000. Likewise, in the Sidney Biennale (1996), the Johannesburg Biennale, the Istanbul Biennale and the Projeckts Skulptur in Münster (1997),  the Biennale di Venezia (2001), the Sao Paulo Biennale (2004), the Biennale de Lyon (2009) and most recently in the Casino Luxembourg (2010).