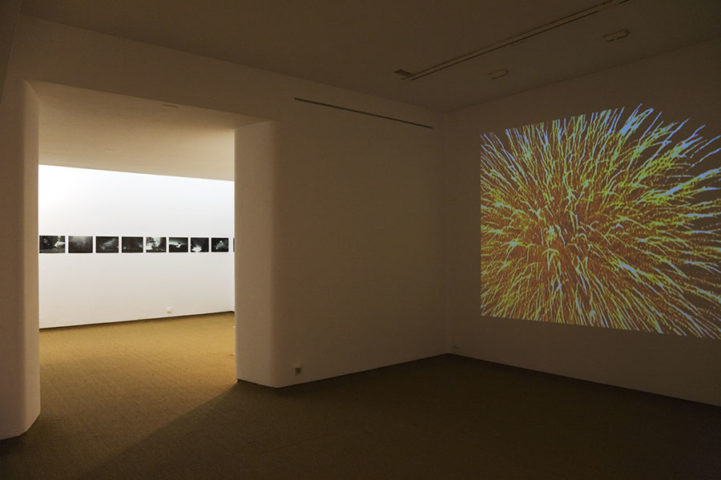 Galeria Joan Prats gathers for the first time the works of the artists Alejandro Vidal and Carla Zaccagnini. In El accidente integral his second exhibition in the Gallery, we will see Alejandro Vidal’s most recent works displayed along with Imposible pero necesario developed by Carla Zaccagnini from the dialogue both artists initiated around their common worries and the different ways to approach the matters arisen in the exhibition.

Alejandro Vidal explores through his work the matters of conflict and relationships of power. The new representations and the mechanisms of control have been recurrent themes, being dealt with from diverse perspectives and multiple formal strategies. Firestorm, 2009, is a filmic composition that explores the globalization of the image of terror through shots of fireworks along with sounds of explosions from military conflicts. Likewise, Somewhere in a great country, 2010, a series of twenty photographs that depict political celebrations involving pyrotechnic events that may seem subversive acts or sabotage. The photographs A step too far, 2009 and Falling from trees, 2009, place forms of political dissidence on the scene. Alejandro Vidal’s recent work in this exhibition deals with uncertainty, insecurity and vulnerability, insinuating that the paths to subversion are more powerful when operating undetected.

Alejandro Vidal was born in Palma de Mallorca in 1972. He lives and works in Barcelona. He has exhibited his work in art centres such as Participant Inc, New York; Kunsthalle Winterthur, Switzerland; Fundació La Caixa, Barcelona; Palazzo delle Papesse, Siena; Schirn Kunsthalle, Frankfurt; The Museum of Contemporary Art, Taipei; MIS Sao Paulo; Da2, Salamanca; kling & Bang, Reikjavik; Mambo Bologna and Kunstmuseum Bern in Switzerland. He has participated in the Busan Bienale in Corea 2006. Among his future projects, Seventh dream of teenage heaven in Bureau for Open Culture, Columbus, USA, and the II Muestra de Videoarte in Havana, Cuba stand out.

Carla Zaccagnini develops such diverse themes as the impossibility of translation, the partiality of museum’s perspective, the fallibility of perception or the limits of scientific knowledge among others, producing a multifaceted work that seeks to activate vision in the spectator and to disconcert viewer’s understanding. Imposible pero necesario is part of an assembly of works that investigate the unstable equilibrium between desire and the impossibility that go with the attempts on representation of an experience and can be seen crystallized (or guess latent) in their resulting form. In this case, two series on paper, frottage and lithograph, register the representation of explosions found in the relief of the Treptower Park, Berlin. By reproducing these images removed from their context, enhancing the geometry that condenses these shapeless events in almost iconic synthesis (though always variable), the artist manifests her interest on language as a possibility on the elaboration of meanings and at the same time as a exercise of power.

Carla Zaccagnini was born in Buenos Aires in 1973. She lives and works in São Paulo. From the late 90s she has been developing activities as art critic and curator in parallel to her artistic practice. She has participated in the 28° Bienal de São Paulo, 2008 and in La Bienal Fin del Mundo de Ushuaia, Argentina, 2007. She has exhibited in institutions such as MUSAC in Leon; LentSpace New York; Museu de Arte Moderna Aloísio Magalhães, Recife; Museo de la Universidad de Antioquia, Medellin; Cisneros Fontanals Art Foundation, Miami; Paço das Artes, São Paulo; Pinacoteca do Estado de São Paulo; MALBA, Buenos Aires; Kunstverein Munich. Among others she has obtained the CIFO 2006 Grants Program.