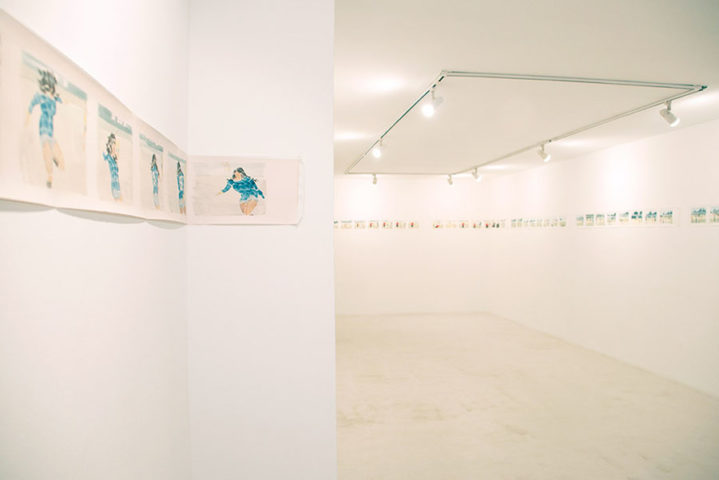 Lola Lasurt’s work takes its roots from a testimonial material belonging to a distant past, from a temporary space that the artist has never been at hand, and works on des-time aspects, avoiding the historic doctrine as an open and self-critical enterprise and surveying it all, both through the phenomenon of recognition and by means of the generation of strangeness.

With a critical approach to the idea of nostalgia, Lola Lasurt carries out an analysis of the recent past characterized by a paradigm shift in the social, political and self-referential facts in the art world itself, working on the relationship between this space and the how-to-build oneself and the collective identity, in an organization system which does not distinguish between culture and heritage, popular and institutional initiative.

The artist is interested in individual historical time, in its relationship with behavioral guidelines of the hegemonic culture, and in its processes for building collective symbols.

Her work is formalized through the pictorial installation, video, and is shown through collaboration processes. On the occasion of this exhibition, the first exhibition of Lola Lasurt in Galeria Joan Prats, the artist presents the following works:

El Partido. Mujeres casadas contra mujeres solteras, una iniciativa de Manuel Ramírez, barman del Club Federico García Lorca. Bruselas, 1976, 2014, project that recreates the football game in which married women played against single ones in the Communist Party annual festival in Belgium in 1976, that comprises a group of seventy-six paintings in the form of animated boards, made from moving images of the super-8 film documenting the original match. This work, the same way as it happens with Exercici de ritme, could be placed at the junction between the personal level, in this case linked to gender issues, and collective interests, as it reviews relevant aspects of recent history concerning moments of change.

Amnèsies, 2011, series of paintings based on pictures from the artist’s family album, where they appeared cut out by her father who, at a time, decided to take their context away and show only family members and acquaintances. Lola Lasurt’s work is based on this decision and involves the rearrangement of clipped images and keeping gaps of some pictures, as if, at some point, they had fallen or been removed. These painted gaps introduce amnesia in the family story and, somehow, evoke the discontinuity and fragmentation that define the mechanisms of construction of memories.