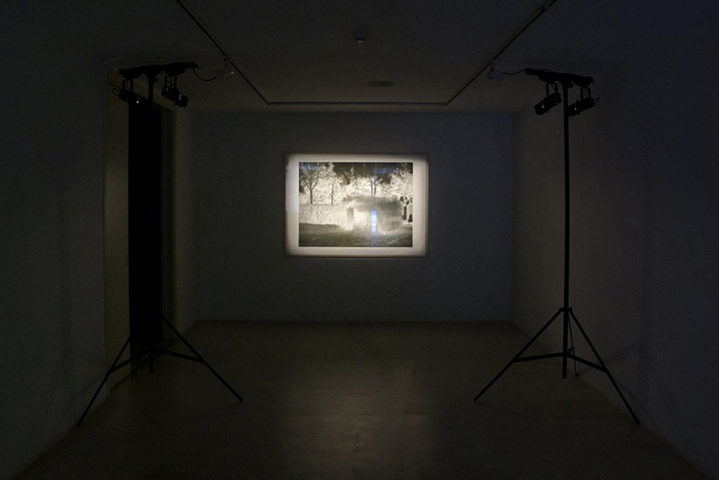 Following a line of long-haul research about the relevance of producing artworks, Perejaume proposes a minimalist experiment, with two new works.

Throughout his artistic production, Perejaume has always questioned the space devoted to works of art. The space, understood as a physical place, such as outer space or place of exhibition –gallery, museum- but also the mental space. To make room for artworks also refers to a temporary notion: how much time do we dedicate to see the works? What place do they have in our lives?

The exhibition can be seen as an intimate and theatrical representation in two times.

The anteroom, with dark walls, introduces us to the gallery with the phrase: Don’t you think that artworks are starting to be as valuable as the space they occupy? There are so many works; can’t you hear them repeatedly saying to their visitors and to their makers: “We don’t fit, please make more room for us”?

The first room is dedicated to a single photograph in black and white, made from the exposure of 140 still frames from the film “El Ball de l’Espolsada”, which was filmed in 1902. The film was commissioned to Napoleón studio in Barcelona when, in the early twentieth century, this popular dance was recovered after fifty years in oblivion. The restoration of this material allowed to rediscover the original choreography. The film, which is one of the oldest footage of Catalonia, belongs to the Ethnological Museum of Barcelona and is deposited at the Filmoteca de la Generalitat de Catalunya.

In the second room, we found an imposing movie projector that presents the film Projecció cinematogràfica del llegat Cambó. Cambó’s legacy is a collection of fifty two paintings by European masters from the fourteenth and nineteenth centuries (Veronese, Tintoretto, El Greco, Rubens, Metsys, Gainsborough, Le Brun, Goya, Fragonard, Quentin de la Tour, Lucas Cranach, Tiepolo…). It is the selfless contribution of more value that MNAC has received and it comes from the political and patron Francesc Cambó (1876-1947). In the projection, the legacy is flowing rapidly as a chromatic flare.