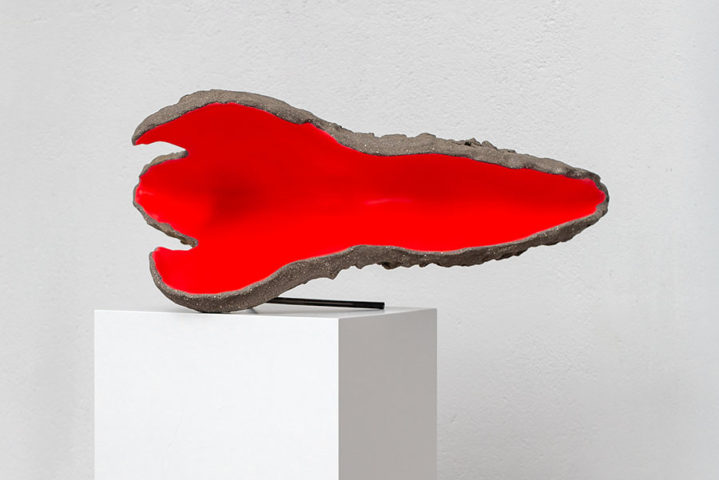 During the Barcelona Gallery Weekend, we present Teresa Solar’s second solo exhibition at Galeria Joan Prats, in which we will show recent sculptures and drawings.

Teresa Solar. Time of worms, or the infinite powers of the subsoil

Close your eyes. Imagine how these, like two marbles, turn inwards, and fall. They fall down inside your body like two rubber balls, bouncing off the walls of your entrails, your organs, your orifices. Sometimes they slide fast, others are slowed down by the viscosity or some cavity they find; But they are falling, falling, falling. Submerged in that inner darkness, your eyes begin to update their perceptual form, expanding their visual sensorium, that is, seeing-touching, seeing-feeling, seeing-falling.

They fall even beyond your body, crossing the ground you step on, entering the thousand layers of earth, stones, remains, of constructions, structures, and times that crowd the subsoil. They move agile through these strata, at times stopping in gaps here and there, seeing without seeing in the blackness that reigns. The deeper they go, and the more they get muddy in that telluric density, the operative divisions of the objective world dissolve to give way to an undifferentiated materiality, full of powers. A sort of dry sea, where they rest in a stagnant, almost rotten time, the fossils of many possible futures.

How is this haptic image perceived by your eyes? How is this chronic time that they reveal? Perhaps the pieces that Teresa Solar presents in this exhibition, El tiempo de las lombrices (Time of Worms), seek precisely this: to show us an experiential image of what is unknown and hidden that we step on, that we walk through, and that inhabits us. It is not a pristine and objective image, like the cut of an engineer or surgeon, but rather a dense and nocturnal object, which tries to embrace all the dimensions that compose her and that escape our capacity for representation. For this, the artist displays a practice similar to a dowser’s practice, activating an imagination that runs through tunnels, passageways, galleries and cavernous systems buried in the bowels of both the earth and the body. The daily use of the Madrid metro, as a transit place “that allows us an exogenous relationship with the earth’s mantle”; the analysis of its own vocal cords; or the speculation about the underground life of worms in the title, are all important references for Solar in this project.

A group of wall drawings welcomes the exhibition: Formas de Fuga (Forms of Escape) (2021), in which tongues, glottis, pharynx, genitals, jaws or other soft organs languidly open before our gaze in a salmon tonality. It is followed by Eco Chamber (2021) is composed of two diptychs made with a black marker, which show a clean cut of the fold, an indefinite flesh from a lens that allows us to appreciate its different layers and sections. In the next room rests the group of pieces Hermafrodita (Hermaphrodite) (2021): cavities of some body —geological or animal— that the claw of a bulldozer, or perhaps creature, has violently torn apart, like their tattered edges show. Its shapes are reminiscent of immemorial marine animals, or the shells of nameless specimens, while the saturated and strident colors that cover its interior walls are a reference to the colors that the operators of the subway and other underground infrastructures normally wear. Dazzling colors, whose brightness does not respond so much to the light that they are capable of reflecting, but to the conservation through the act of shining of that darkness in which they move; definitely, “the color of darkness itself” according to the artist. Finally, the series Nacimiento (Birth) (2021) shows a system of orange communicating vessels, in which various cellular patterns intersect and evolve symbiotically until culminating in the eruption of a tooth.

Solar reminds me of a quote from Slaughterhouse-Five by Kurt Vonnegut in which an alien from the planet Tralfamadore describes the poverty of time tunnel vision in Earthlings, only to conclude: “All time is time. It does not change. It does not lend itself to warnings or explanations. It simply is. Take moments for what they are, moments, and soon you will realize that we are all insects trapped in amber. ” The movements through tunnels in this exhibition are also a metaphor for a linear experience of time that, far from any promise of peaceful progress, is a vector of anxiety in the artist in front of the prospect of an irremediably univocal future. The use of ceramic, being a material with a great insulating capacity, underlines this closure, evoking qualities of the watertight, even the hermetic. But pulling the thread of that unearthed imagination, these isolated and insulating clay sculptures also enclose within themselves a deep subsoil time in the very matter from which they are made and the speculation from which they emerge. By tearing and opening these cavities-pieces, the artist seeks to spread in front of us this stagnant time that flees from linearity towards other material ontologies, towards other ostensible imperceptibilities, and perhaps, also, towards another more egalitarian and less violent temporal distribution. In them beats a congregation of temporary powers, without definition or direction because as their name Hermafroditas (Hermaphrodites) (2021) suggests, they are creatures in a state of undifferentiation, of pure (sexual) potency without actualizing or fixing on any denominator; and that, therefore, they contain within themselves all future forms and possibilities.

At the heart of this set of sculptures and drawings there is Tuneladora (2021): a sculpture in which a pair of resin fins grow powerful and slender from a muddy outgrowth. The fins (which could also be blades, or oars) are painted from their edge in a gradient from navy blue to white, reminiscent of baroque chromaticism in the way that it underlines the shadows and lights of the piece while emphasizing its speed and movement. They refer to the dolphin and its symbolism that Solar reads in the key of Minoan mythology, where these animals are attributed the ability to guide to a safe harbor; and at the same time, they are covered with the patina of a fair booth that we find in previous projects of the artist. Their polished and dynamic finish contrasts with the heavy and immobile presence of the mud from which they arise; a kind of stump of a missing joint, perhaps belonging to some deep-seated dweller. In fact, the piece invites us to imagine that when it is operated, it has unearthed the cavernous sculptures that surround it: while the group of Hermafroditas shows the emptying, Tuneladora (TBM) presents the positive body that excavates the tunnel gallery. This amalgamation of the geological and shapeless materiality of the mud with the plastic hyper-definition of the fin combines in an unprecedented way two registers present in the artist’s work, the one of the raw and abstract power of the material with the updating vector of fiction, which crystallizes in a language — both symbolic and aesthetic— sharp and precise. As if the speculative grammar of fiction, loaded with all its signs and forms, emerged from the torrent generated by these two helices in the wild and unknown substrate

Curator, researcher and educator. She lives and works in Utrecht, where she is curator of the Post-Academic Program at BAK, basis voor actuele kunst

Some of her most prominent solo shows include “Ride, ride,ride” in Matadero Madrid (2018) and Index Foundation in Stockholm (2019) and “Flotation Line” at DER TANK, Institut Kunst Basel, Switzerland (2018). She has also created solo exhibits in galleries such as “Time of worms” at Galeria Joan Prats, Barcelona (2021), “Forms of Fleeing” Travesía Cuatro Gallery, Madrid (2020), “Pumping Station” in Travesía Cuatro CDMX Gallery in Mexico City (2019) and “Ground Control” at Galeria Joan Prats, Barcelona (2017).

Solar’s work has been recently shown at the Liverpool Biennial 2021 curated by Manuela Moscoso, at the VII international Biennial of Young Art of Moscow (2020) and at the Köln Skulptur Park  #9 curated by Chus Martinez  (2017-2020) . Solar’s projects have been present at groups shows in Haus der Kunst, Munich; Kunstverein Munich, Kunstverein Braunschweig, Maxxi Roma, CA2M Madrid, Patio Herreriano Museum Valladolid and Marcelino Botín Foundation Santander, among others. She is currently a finalist of the Future Generation Prize 2021-2022 at Pinchuk Foundation in Kiev.

In 1507 the barber Joerg Schan condensed the tradition of the character of “none” or “no one” in a pamphlet distributed in the streets of Strasbourg that said: “No one is my name, I bear everyone’s guilt”. This character appears as the nickname of the person responsible for the broken things and tools lost in the house, of the fool, or of the peddler who sells trinkets and tricks. But also of the one who does not bite his tongue to make criticisms, of the one who faces a power that sees transitory or of the one who perceives the soul of things.

Erick Beltrán recovers these two figures – none and some – to create a bigheaded character that distributes a newspaper with different analyses of speculation in the city of Barcelona, whose pages include a visual essay on how this type of speculative practice defines territory, objects, subjects or belongings. The characters travel through different areas of the city distributing newspapers and interacting with tourists and residents. 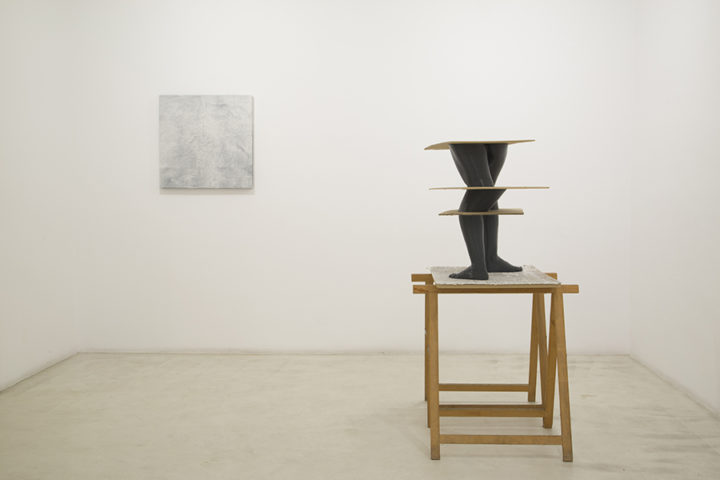 We are pleased to present Julião Sarmento’s fourth exhibition at Galeria Joan Prats, titled Objects on the New Landscape Demanding of the Eye (part 3), in which we will show his recent work, with installation, sculpture and painting.

The title of the exhibition recalls that of the first exhibition held at Ferus Gallery in Los Angeles in 1957, which included paintings by various artists and in which the installation and assemblage pioneer, Edward Kienholz, participated.

In the exhibition, the installation Crash Dummy, 2016, and the sculpture Broken Alice, 2014, coexist with a series of paintings that show triangular shapes, delicately drawn, based on the fundamental principles of fractal geometry, and other works inspired by the Little Dancer Aged Fourteen of Degas. This diversity of supports and techniques present in the exhibition is characteristic of the artistic practice of Julião Sarmento and, on this occasion, stands out for the combination of materials that could be defined as poor with materials subject to advanced technological processes.

Julião Sarmento produces a work that adopts multiple forms with drawings, paintings, sculptures, performances and videos that speak of the artifices of seduction and the mechanisms of desire. From its beginnings, in the middle of the seventies, the work of Julião Sarmento has been characterized by its archival character. Thus, in his works, they can appear feminine silhouettes, architectural plans, literary fragments and objects.

Often, these coded iconographies explicitly present us with the signs needed to identify to the source of his imagery and its meanings. This constant oscillation between appearance and reality, fiction and documentation, invention and fact with which Sarmento confronts us is not at all a gratuitous game. The assemblages fashioned by the artist play on this dialectic of superficial interpretation, where many elements are perfectly identifiable, even banal or anodyne, and deeper interpretation that drives us to seek correspondences, links and relations without realizing that the very fact of carrying out this search is itself the meaning we are supposed to discover.