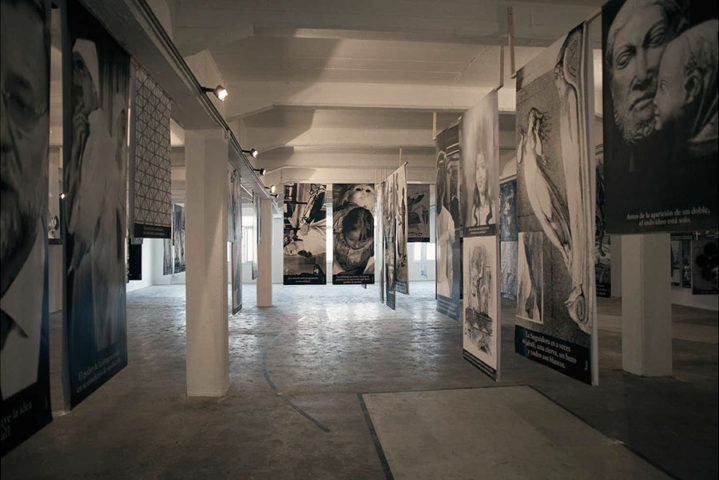 [The double does not exist / The one-thousand-face double]

A shaman letting run his soul off in the shape of a dog.

A patient watching how he is operated while levitating in the surgery room.

The succubus that does not let us breathe during the sleep.

A person having a wake for a mirror upon someone’s death at home.

The homunculus operating from a control room.

The werewolf stealing the next harvest to the devil in order to give it to men.

The devil composing a symphony to Tartini.

Bonnet looking at 10 cm-height-women wearing a 16th Century-style hair coming into their room.

An artist painting a secret room where the king is getting rotten.

A woman attacked by her own hand.

The king’s doctor taking vital signs of a puppet that is being treated.

A stone buried in exchange of a seaman who never came back.

Zeus turning into Amphitryon and Mercury into his assistant Sosia in order to seduce an unreachable mortal.

That guy who is looking at us from behind our shoulder.

Some dogs playing poker and a satyr playing the flute.

Two snakes that are a human skull, that is a war goddess that kills her 400 brothers from her mother’s belly.

What makes move our organs beyond conscious decisions?

Why cannot we control our dreams?

Why is there the sensation that our consciousness lives inside a body and is not the body?

Why upon death something remains and something leaves?

Who is talking during altered states of consciousness?

Why can we listen to a voice inside our mind?

Does the duplication of something imply the taking of an original?

Why does the unique represent an actual value?

How is built the idea of officiality?

How are these conceptual orders conveyed to a people’s organization?

Why the concentration of truth implies physical strength in the world?

What defines a unity’s limit?

What happens when a body lives inside another body?

What happens when a body is not tied up to the temporary narrative?

Why the beyond world shows up in the shape of spectres, devils and hells?

Under what circumstances can we see ourselves out of ourselves?

When does man perceive himself as a unity?

When does man become  a universe’s reader?

How can extra-corporal journeys be made?

What kind of relationship do fairies, witches, zombies, vampires have with the double’s world?

Can we make the double’s shut up?

The man’s ego is the unit under which everything is ordered and classified. Nevertheless a doubt always nests this psyche, another thing looms out through a breach a little further, this is something that denies its independence and ineffability

The way that the unity has to understand the universe in all multiplicity is the creation of an alter ego that feeds back the looking. 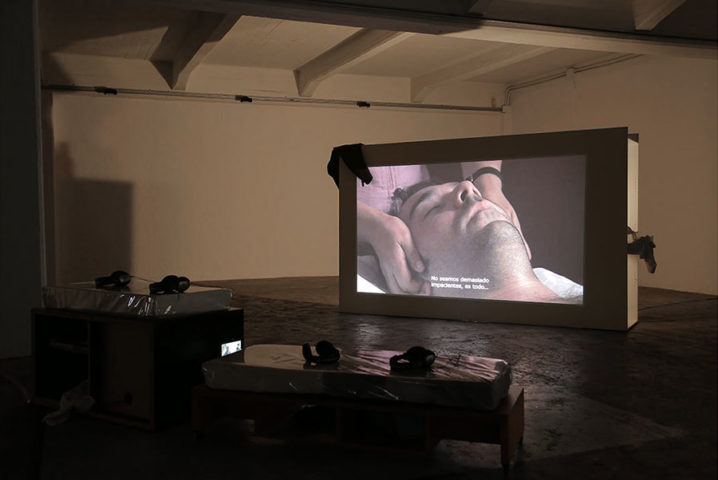 Alex is a fictional character created by the artiste Pauline Bastard. With the help of an anthropologist, a lawyer, psychoanalyst, stylist, decorator and writer, Alex has been imagined and followed for more than a year in the process of integration in real life, faced with the construction of its social, administrative and emotional existence.

The exhibition design allows visitors to slip inside the character’s life: benches and cushions with printed objects, standard furniture and personal effects of Alex, the display evokes a domestic interior and allows to discover 6 videos of Alex‘s life, from its genesis to its “first steps”.

A casting to choose the right Alex, the meetings of professionals, the moments of the construction of a character without a past… we are attending to fragments of the beginning of an existence, a creative process, not an avatar, but a person made of flesh and bone who face up urban and social relations. The result is an experiment movie: neither fiction nor documentary, dozens of hours of film are evidence of the existence of Alex.

With this Project, Pauline Bastard raises a number of questions.

Alex talks about the construction of identity, of our society. Who is Alex?

This project has been awarded by Audi Talent Award and had receive the support of CNAP (Centre National des Arts Plastiques).

Pauline Bastard creates complex narratives developed through installations, films and sculptures containing and relating to her experiments. Through collaborations she questions the construction of the self and its place in the contemporary world.