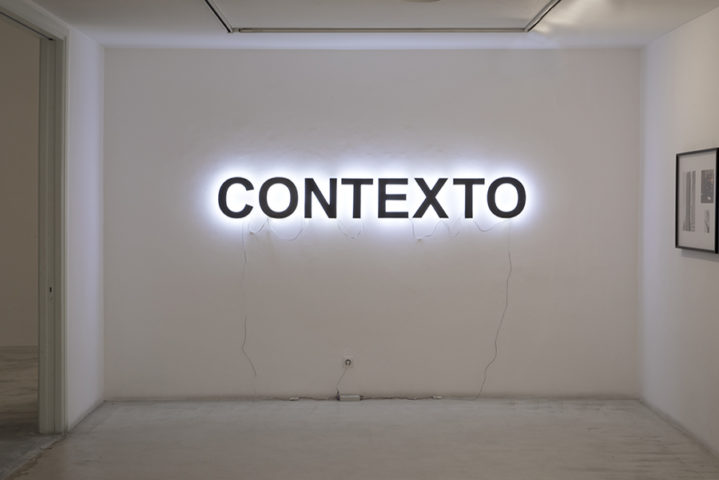 «The first time Muntadas talked to me about the exhibition Edicions II at the Galeria Joan Prats, he referred to it as an “exhibition of deltas”. I asked him to elaborate: “my projects are one, they are units. But these units diversify into huge quantities of postcards, there could be up to 100.000 postcards, and could even include 17 metal plaques distributed throughout the city in the form of signage, or a web page. So, the project finally appears as the sum of three collections of remains; that is of deltas” (…)

Editions allowed Muntadas to achieve a more porous and plural circulation by its multiplication and intervention capacities across diverse media and in different time frames. While his projects usually consist in one video, one installation, or one urban intervention, his publications are rarely made up of a single unique element (…)

A truly genuine notion of project has also emerged throughout Muntadas’ career. The artist tackles the project, on the one hand, as the logic behind a series of procedures, based on the repetition of processes and strategies and on the other, the project defines itself following the logic of a work in progress, generating moments of aperture. In this way, the notion of project, as Muntadas states, has allowed him to depart from a type of intuitive and immediate practice while helping him to structure flexible environments, open to unpredictability, developing platforms to work in the long run (…)

The editorial work and the publications is where Muntadas has experimented more precociously and with more intensity than in any other medium the collaborative methods that have ended up impregnating the whole of his work. Here is where one finds the deployment of strategies that catalyse translation no longer, as just a metaphor, so much as in particular a process of bidirectional exchange.»

Muntadas, born in Barcelona and living in New York since 1971, was a pioneer of video and installation in the mid-seventies, and continued working with photography, video, installation, audio, and urban interventions. Iterations of his iconic projects, such as Between the Frames: The Forum (1983-1993), The Board Room (1985), and the on-going series On Translation (1995- …) and The Construction of Fear (2008- …) – have been exhibited in institutions and galleries of the USA, Latin America, Europe and the Mid-West. Muntadas participated in the Documenta’s 1977 and 1997 editions, the Whitney Biennial of 1991, the Bienal de São Paulo of 1983, the Bienal de La Habana of 2000, the Taipei Biennal of 2002, the Gwangju Biennale of 2004, the Instanbul Biennal of 2011, and the Paris’ La Triennale of 2012. In 2005, he represented Spain in the Venice Biennale, where he created an integral project about the architectonical evolution of the Biennale throughout its history. His works have been included in exhibitions at MACBA, Barcelona; Laboratorio Arte Alameda, Mexico City; Weserburg Museum, Bremen; Espacio Fundación Telefónica, Buenos Aires; Württembergischer Kunstverein, Stuttgart; and Estação Pinacoteca, São Paulo. Since 2011 he has been working on the project Asian Protocols, presented to the public for the first time at Total Museum of Seoul (2014), and for the second time at 3331 Arts Chiyoda of Tokyo (2016). The next step of the project will be its development in China.

A catalogue has been edited especially for the exhibition