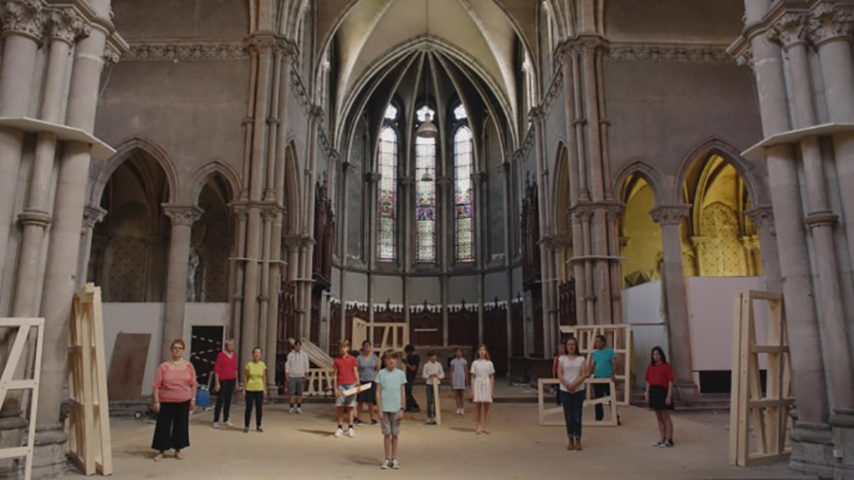 For the Lyon Biennale, Annika Kahrs has conceived a video installation that shows a sonic and visual process of construction and deconstruction, performed by different musicians and multiple carpenters. These groups come together at the church of St. Bernard in Lyon. During the performance, the carpenters build a wooden structure resembling a house inside the church, while the musicians react to and with them. A visual and sonic mixture of tense and loose moments, choreographed and coincidental encounters, as well as melodies, drone sounds from organ pipes, voices, hammers, and screwdrivers within the majestic reverb of this space materializes on screen. The place where the performance takes place – St. Bernard – is chosen very carefully and connects directly to the theme of the Biennale “Manifesto of fragility” : the history of this place tells a long story of deep entanglements of class, resistance and independence, faith and institutional religion, as well as processes of social change and the importance of communities within it. By constructing a very basic structure of a house – or rather a place – during and as part of the performance, the importance and the endless processes of finding and forming new places for voices – translated both through action and sound – are put into spotlight. When entering the church for the first time Annika Kahrs was immediately fascinated by its atmosphere that was still connected to the feeling of being in a church, but already charged with something completely else. For her this church is first of all a place of in-between. A place of transformation. The traces of its former purpose are clearly visible: organ pipes are laying around, christian statues are still standing on columns, some of them more stored than being presented, masterful crafted stained glass windows shine in colors, although some of them are broken. One can almost hear how it used to sound in here – because we know how those places sound. For her work, Annika Kahrs aimed to fill this place again with common sounds, new sounds and people who shape this space – acoustically and visually – into something else for a moment, but also emphasize its liminal state. The history of the church and of the neighbourhood also plays an important role in the concept: La Croix-Rousse was a district for many different religious communities (the hill that prays) before it became crucial as the most important place for silk production (the hill that works) and was inhabited by the community of the Canuts. After the uprisings of the Canuts between 1831, 1834,1848 the church St. Bernard was build on request of the Canuts to have a religious place for their own community within their district. But the other reason, coming from outside of the community, was to calm down the conflicts resulting from the revolts: “In reality it seems that the wish for a new church didn’t only come from the people, but the idea was to rather use the religious institution to undermine revolutionary ideas and revolts”.